It was hard keeping this news under wraps for the past few months, but I’m excited to announce that BOURN KIND- Tiny Kindness Project will premiere in June at the Tribeca Film Festival! 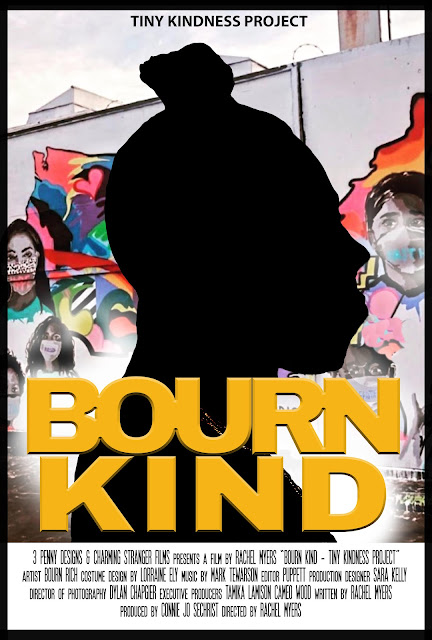 This is the second project that director Rachel Myers and I have worked on, and the post-production audio was done entirely in the Meyer Sound Design Studios at UCI.  I did the foley performance, editing, mixing, and mastering, and MFA student Costa Daros worked as the foley mixer.  Here we are hard at work recording and mixing foley. 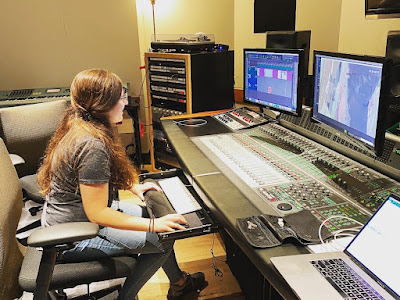 Congrats to everyone who made this beautiful film happen!  Check it out if you can!

Today is the final day of performances of Clean/Espejos at South Coast Repertory. It was a short run – barely two weeks of performances, culminating in a flurry of shows during SCR’s Pacific Playwright’s Festival.

I’m proud of my work on the show – there’s a lot of music in it, plus an extraordinary amount of non-musical sound. If you had a chance to see/hear it, then you’ll know how essential music (and the design in general) is to the telling of the story. The dynamic nature of the world (scenery automation, video, lights, etc.) are a metaphor for the characters as they tell their story. If you didn’t see it, you missed out on a terrific production!

I also have an observation about press/marketing/billing. In the original printed program and on SCR’s website, my credit for composition was left out. I was billed only as the sound designer. When I brought this to SCR’s attention, they immediately added an insert to the program, but they failed to update the website until the day before the show closed.

The press for the show has been strong, and all of the reviews specifically note the strong design as essential to the production. Scenery, Costumes, Lighting, and Video all get specific mentions in at least one piece of press, but Sound/Music never does. No compliments, no criticisms, no panning… just crickets. For a show that has over 30 minutes of original music, much of which is played quite loud (ie you can’t pretend it doesn’t exist), why doesn’t the aural world get a single mention?

I suspect that it’s because I’m billed only as the designer, not as the composer. Critics know the difference between sound design and music (it’s very clear in this production), and I suspect that the fact that I wasn’t listed as a composer in the program suggested that the music wasn’t composed (meaning that it was curated or pulled from existing sources). And, because the music was by far the most memorable aspect of the sonic experience, critics found it difficult to write about the sound design without referencing the music. So, while they may have noticed the role that music/sound played in the production, they didn’t have a composer to point to in the review. So, they left me out.

Of course, there’s no way to know for sure, but based on my other experiences with billing, design scope, and press mentions on other shows, I suspect that SCR’s inability to credit me properly in the places where the critics would go for their data (a paper insert is a nice gesture, but the inserts easily fall out of programs or are otherwise overlooked) had a direct impact on the complete lack of mention of my work in this beautiful production.

The United Scenic Artists (my union) has a collective bargaining agreement with League of Resident Theatres (an industry group that represents SCR), and the agreement notes that inaccurate billing, if rectified promptly, can not be considered a breach of contract. What counts as ‘promptly?’ What counts as ‘rectified?’

One of the quirkiest theatre sound playback tools available is Ableton Live. Live (currently in version 11) is more often used by theatre sound designers as a DAW, but in certain situations, it can be a powerful tool for playback, particularly if the content involves lots of dynamic music. I won’t go into when/how/why to choose Live (over QLab, D-Mitri, Canvas, Qsys, etc.) – that’s a longer conversation, nor will I outline how to use Live as a theatre playback tool in this post (that’s better served as a masterclass by not-me).

For live Live playback considerations, it’s useful to think of Live as a set of CLIPS, which are audio, midi, or control parameters collected in small executable chunks, and SCENES, which are collections of clips that are executed at the same time. When executing simple cues (playing back a sound, fading it out, etc,), a single SCENE of multiple CLIPS can be useful, but if you’re executing a complex cue, you’ll often end up needing multiple SCENES to get the job done. This isn’t a huge deal – it’s relatively easy to program once you’re familiar with Live. However, Live doesn’t handle multiple scenes well for theatrical playback. What I mean is this:

Say Cue 13 only consists of one scene. When you press GO on Cue 13, it automatically advances to the next scene, which is also the next cue. BUT, if cue 42 consists of 5 scenes (because it’s hella complex and you’re hella detailed), Live will automatically advance to the scene AFTER cue 42, which is still a part of cue 42. There is an easy midi-mapping or use-the-arrow-key tool to advance an additional four scenes to the next cue, but in the heat of a dense run, that’s an extra few brain cycles for the operator that we’d all rather avoid.

Is there a way to have Live automatically advance scenes so that the operator pressing ‘go’ doesn’t have to worry about advancing through internal scenes? I asked the TSDCA facebook group this question (and google), and there wasn’t a good solid answer. Sound designers Matt Otto and Mikhail Fiksel both offered some thoughts, but neither had solved the problem to my satisfaction. Matt and Misha had both looked at the problem as QLab controlling Live, but I wanted to remove QLab entirely from the equation. After a Zoom chat with Misha during tech for Clean/Espejos at South Coast Repertory, an idea lightbulb went off in my head, based in part off an idea that Matt had written about when he was at Yale.

HERE’S HOW TO GET LIVE TO AUTOMATICALLY ADVANCE THROUGH SCENES WHEN RUNNING COMPLEX CUES (on a mac):

First, open your Audio Midi Setup, head over to the Midi Studio, and double-click on IAC Driver.

Once that’s done, head over to Live and COMMAND-, to open the preferences. Head to your MIDI preferences and you’ll see the IAC Driver show up in your MIDI ports. Check In:REMOTE and Out:Track. Close the prefs.

In Live, create a new MIDI track, and choose your IAC Driver as its destination. Create a MIDI clip in that track that plays one note.

At this point, your MIDI clip, when playing, should automatically advance the scene once per loop. Here’s a quick vid of it working:

That’s all fine and swell, but you may notice that the above vid plays perpetually, continually advancing to the next scene. What if you just want to advance a specific number of scenes to get your Live playhead to the right place? That’s easy enough by using the Follow Action menu:

And that’s it! The one caveat is that you do need to make sure that you’re looping your midi clip the right number of times (set your loop count to n-1, where n is the number of scenes you need to skip), but other than that, this is a solid way of advancing Live scenes so that your A1 can just press GO.

Back on the Horse

Sound Design work is picking back up in theatre after the covid shut-down. Here’s what I’ve been up to:

Last fall, I did the post-production audio for Bourn Kind: The Tiny Kindness Project, a short directed by Rachel Myers. I performed foley, mixed, and mastered it. It’s being submitted for festivals now, so keep your eyes peeled!

In March/April, I’ll be designing and scoring Clean at South Coast Rep.

In May, I’ll be designing and scoring The Tempest at Oregon Shakespeare Company. We were originally scheduled to open this two years ago, but ….. covid. Glad we’re putting it back up on its feet!

More soon…. I’m going to try to be better about keeping this blog updated!

In the past few months, I’ve been working on a number of new projects. Some are running, some are closed, and some are upcoming!

In March, I opened a funk musical that I scored in socal. Clown Aliens is a piece that I’ve been developing for a few years now, and I was glad to see this production! You can out some of the recordings here.

In April and May, I worked on the world premiere of a play called Actually at the Geffen Playhouse. It was terrific to be back to work with them, one of my artistic homes in CA.

Right now, I’m wrapping up previews of The Tempest at the New Swan Shakespeare Festival. If you’re down in OC, come check it out!

In September, I’ll be designing Romeo and Juliet at The Guthrie in Minneapolis.

In the meantime, I’m taking some time off with my family, working on home projects, and enjoying a bit of a break.