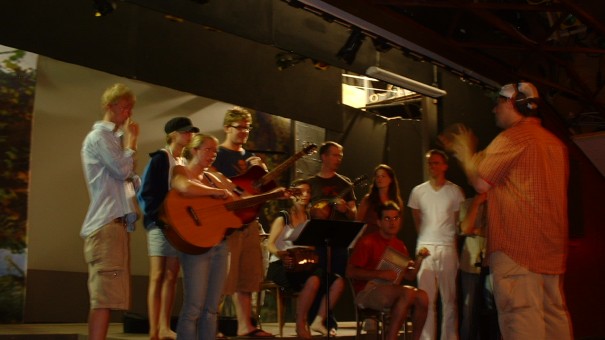 This ‘As You Like It’ is set in a mental institution in the late 1950s. When the characters leave the court for the forest of Arden, they leave an oppressive and paranoid world for a warm and natural environment. The design for the court featured a dense soundscape of distortion, whereas Arden featured very little ‘sound;’ I opted instead to focus on the ‘music’ of the forest, working in a folky/country idiom. The members of the cast were varied in terms of age (the youngest was 15), vocal training, and instrumental training, and I worked with them all to teach the songs I wrote, which we recorded live before one performance. While the recordings aren’t perfect technically, they do capture the atmosphere and heart of our forest of Arden.

The first song is ‘Under the Greenwood Tree,’ which Amiens plays by himself.

‘If It Do Come to Pass’ – Jacques has written alternate lyrics to ‘Under the Greenwood Tree.’ He sings (and plays mandolin) while Amiens reprises his guitar part.

‘What Shall He Have that Killed the Deer?’ – Amiens, Corin, and Touchstone sing this quick piece, which was written to be a sudden and energetic break between two down-tempo scenes.

‘It Was a Lover and His Lass’ – Audrey and Phobe begin this song, singing to Touchstone on an empty stage. As the song progresses, more characters enter and sing. By the song’s end, the entire company is on stage. Having just sung a cathartic song, they’re now ready for the resolution that the last scene of the play brings.