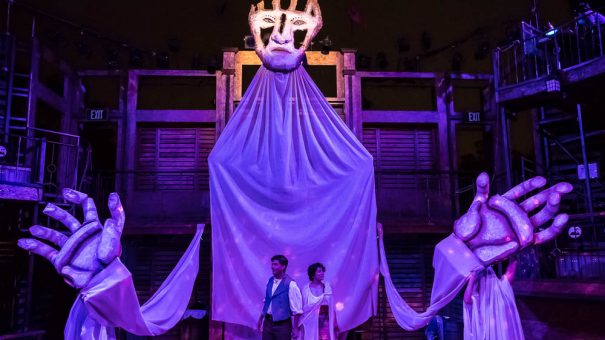 The Shakespeare Classic was presented in an intimate setting, so all of the magic inherent in the production was in full view. Puppets were visibly manipulated, shadows were clearly created by actors, floating objects held in place by fairies, etc. The music wanted to be both magical and intimate, and it also wanted to feel appropriate to the scale of the production. The early conversations started out with a Korngoldian sense of grand piracy, but we soon settled on a more smaller vocabulary that didn’t dwarf the stage action.

This music underscored the storm in the first scene. It was accompanied on stage by the frenzy of the characters, and the ending sequence, where the music spreads out and slows down, served to underscore the beginning of the scene with Prospero and Miranda the next morning.

This music underscored Prospero’s explanation to Miranda of her history in Italy before their exile to the isle.