Vincent Olivieri is a Composer and Sound Designer with credits throughout the United States and internationally. He lives with his wife and their daughter. And their plants.

Regionally, his wide range of theatre & composition credits include ROMEO AND JULIET at The Guthrie, NOISES OFF and THE HEIRESS at South Coast Repertory, GUARDS AT THE TAJ and SKINTIGHT at The Geffen Playhouse, JITNEY at The Pasadena Playhouse, LAST TRAIN TO NIBROC, JITNEY, and TIGERS BE STILL (for which he won a League of Cincinnati Theatres Award) with Cincinnati Playhouse in the Park, RADIO GOLF and RABBIT HOLE at Pittsburgh Public Theatre, HAY FEVER and PERMANENT COLLECTION at Baltimore’s Center Stage, CURSE OF THE STARVING CLASS and HAY FEVER at Yale Repertory Theatre, GEM OF THE OCEAN at Milwaukee Repertory Theatre, VENUS IN FUR, THE UNDERSTUDY, SHAKESPEARE’S R&J, and DRIVING MISS DAISY at Theatreworks Hartford, WONDER OF THE WORLD, KIMBERLY AKIMBO, and FULLY COMMITTED at Barrington Stage Company, INTIMATE APPAREL and JITNEY at Indiana Repertory Theatre & Syracuse Stage, INSURRECTION: HOLDING HISTORY at Berkshire Theatre Festival & Theatre Alliance, ELEVADA at The Chance, SPLITTIN’ THE RAFT at People’s Light and Theatre Company in Philadelphia, AS YOU LIKE IT and HAMLET at Opera House Arts, DELIRIUM FOR TWO with Theatre Novi Most, THE TEMPEST at New Swan Shakespeare Company, and TREASURE ISLAND and KING LEAR: THE STORM AT HOME at Virginia Stage Company.

Vincent worked for three years as the Resident Sound Designer at Actors Theatre of Louisville, where he designed and composed for the regular season and for Actors Theatre’s world-renowned Humana Festival of New American Plays. While at Actors Theatre, his Humana credits included the world premiere of Gina Gionfriddo’s AFTER ASHLEY, Kirsten Greenidge’s SANS-CULOTTES IN THE PROMISED LAND, Jerome Hairston’s A. M. SUNDAY, Melanie Marnich’s TALLGRASS GOTHIC, Charles L. Mee’s LIMONADE TOUS LES JOURS, Adam Rapp’s FINER NOBLE GASES, and Alexandra Gersten-Vassilaros and Theresa Rebeck’s OMNIUM-GATHERUM. His work on The Humana Festival’s production of Russell Davis’s THE SECOND DEATH OF PRISCILLA was selected to be exhibited at the Prague Quadrennial Design Exposition.

Internationally, Vincent’s work has been heard in Romania at The National Theatre of Romania (Cluj), Italy at the Arezzo Festival (Arezzo), China at the Asian Pacific Theatre Expo (Shanghai), the Prague Quadrennial, and South Korea with the Tuida Performance Group.

Vincent has a particular interest in new work development, and in addition to his work at the Humana Festival, he has created designs and scores for many new plays, including Matthew Lombardo’s HIGH at Theatreworks Hartford (subsequent productions at Cincinnati Playhouse in the Park, The Repertory Theatre of St. Louis, and on Broadway), Neil LaBute’s adapation of MISS JULIE, Anna Ziegler’s ACTUALLY, Rachel Bonds’ FIVE MILE LAKE, Michael Golamco’s BUILD, Melody Bates’ AVALON, Keith Josef Adkins’ SAFE HOUSE, Tira Palmquist’s AND THEN THEY FELL, David Wiener’s EXTRAORDINARY CHAMBERS, Howard Korder’s IN A GARDEN, Sarah Treem’s FEMININE ENDING and Lauren Gunderson’s EMILIE at South Coast Repertory Theatre, THE OLDEST STORY IN THE WORLD at Theatre Novi Most, THE AMERICAN OCCUPATION at The Juilliard School, Len Jenkins’ THE BIRDS at Yale Repertory Theatre, and THIRTY GHOSTS at Ensemble Theatre Company in Cincinnati (for which he won a CEA Award). He co-designed and co-scored the premiere of Roberto Aguirre-Sacasa’s THE VELVET SKY at Woolly Mammoth Theatre Company in Washington DC. His music was heard in The New York Public’s production of Tarell Alvin McCraney’s THE BROTHERS SIZE. With The Clownzilla Theatre Troupe, he developed A HOLIDAY EXTRAVAGANZA, ILLEGAL ALIENS, CLOWN PLANET, and READY SET DEAD. He created the sound design and score for RAZBOIUL CLOVNILOR (WAR OF THE CLOWNS) and the musical CLOVNI EXTRATERESTRI (CLOWN ALIENS) at Teatrul National Cluj in Cluj, Romania. He has workshopped new plays for The New York Theatre Workshop and New York Stage & Film. In 2005, Vincent created the sound design and original music for the world premiere of RADIO GOLF, the last play in August Wilson’s ten-play cycle chronicling the African-American experience in the twentieth century.

With sound designer Brad Berridge, Vincent performs as one-half of THE NIGHT I FOUND OUT I WAS ADOPTED, an experimental improvisatory duo performing entirely on mobile computing devices. With Berridge and designer/engineer Davin Huston, Vincent is a founding member of PUSH THE BUTTON, a sound-art collective focused on using the audience as a variable factor in the creation of corporeal sound art.

Outside of the theatrical field, Vincent conducts research and creative work in sound for Virtual Reality. Currently, he is running a research group with UCI Informatics Professor Tess Tanenbaum that consists of students in Sound Design, Computer Music, and Computer Science.

Vincent teaches at University of California-Irvine, where he serves as Associate Dean of Graduate Affairs for the School of the Arts and Head of Undergraduate Sound Design. Prior to joining the faculty at UCI, he taught, lectured, led workshops, or served as a guest artist at many colleges and universities including Auburn University, Barnard College, Bellarmine College, The Juilliard School, UMass-Amherst, and Yale University.  He is an active member of the Sound Commission of USITT and a regular contributor to freesound.org. He has written a number of articles for trade magazines including Stage Directions and Lighting and Sound America.

Vincent holds a BA in mathematics and a minor in music performance from the University of Richmond and an MFA in Sound Design from the Yale School of Drama. 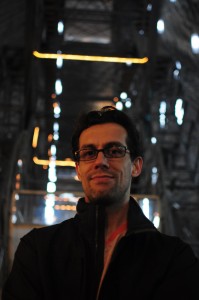